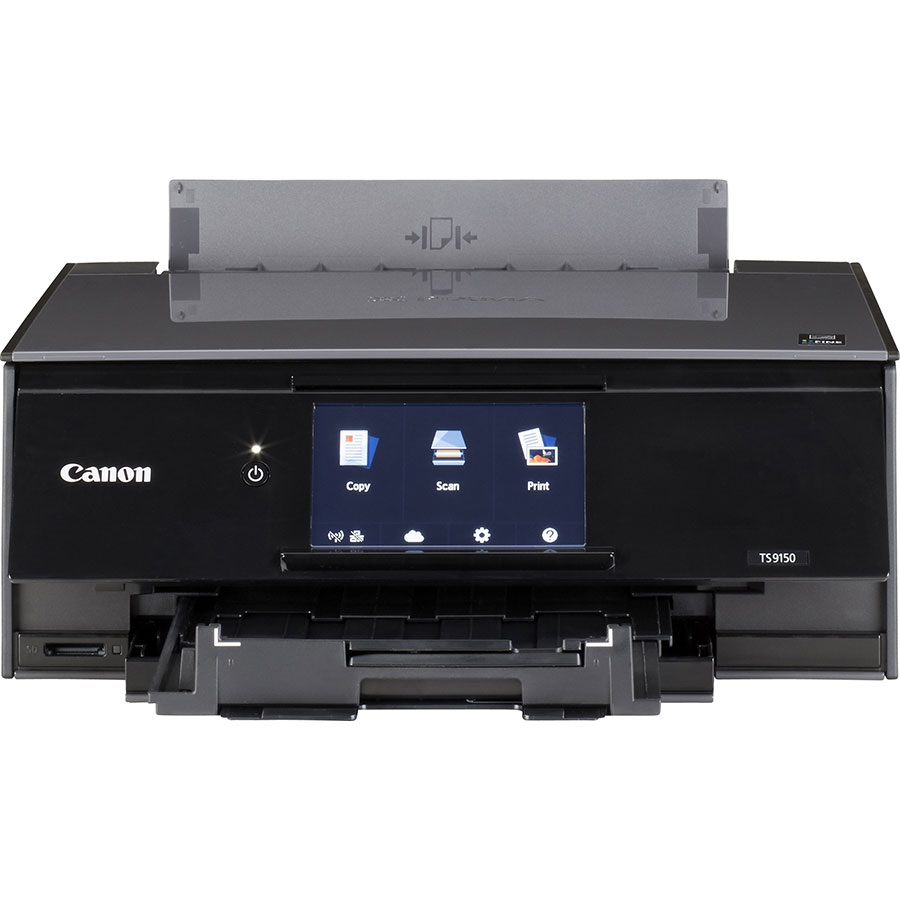 The Pixma TS9150 represents the top of the box in Canon's photo-oriented multifunction inkjet printers. And who says high-end says dear! A very important extra cost compared to the excellent TS8150 or TS8050, also loaded with features and that can be found quite easily for a hundred euros in the trade. So, is the TS9150 worth its price? This is what we will see. 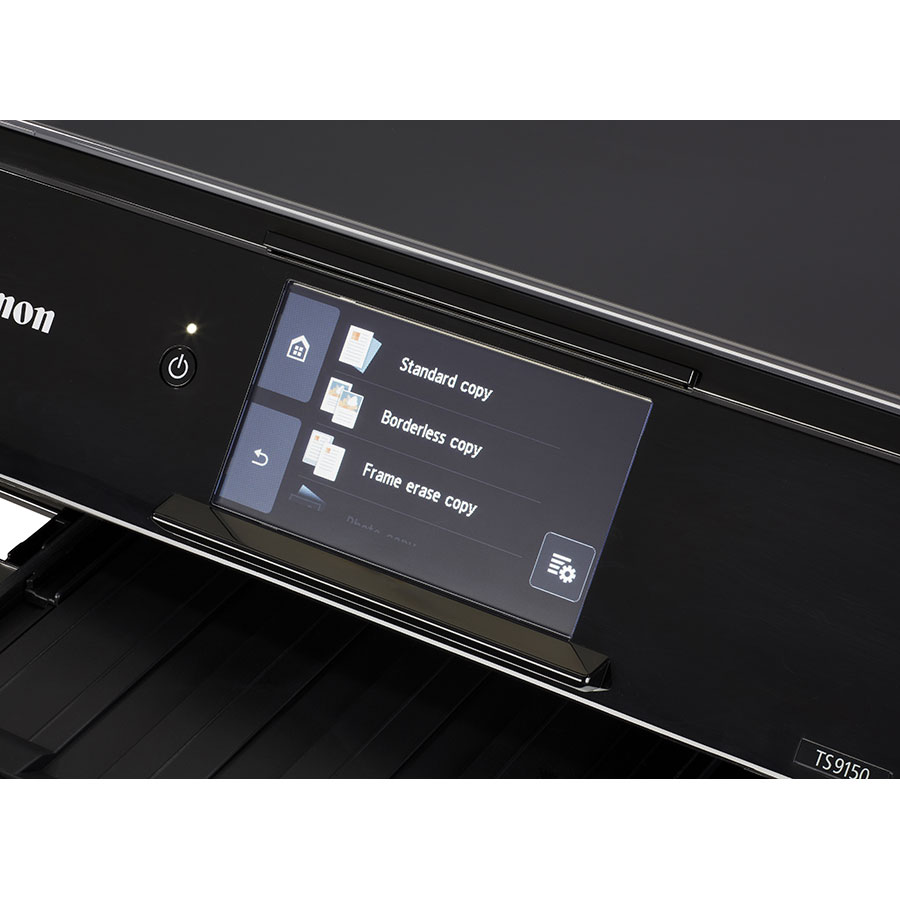 Apart from a little more square lines, exclusive colors (dark gray and red), and the integration of a larger color touch screen (12.6, against 10.8 cm diagonal), nothing differentiates in appearance this Pixma TS9150, TS8050 and TS8150. This 3-in-1 printer has the good taste to adopt the same measurements, so to be relatively compact (37.2 x 32.4 x 13.9 cm all closed shutters). A mastered design that we have already had the opportunity to extol the merits, especially as it serves here a product with many possibilities.

Note the presence of an Ethernet port that is missing TS8050 / TS8150. This is convenient for those who would like to share this printer on a local network without using Wi-Fi, but obviously not enough to justify the significant price gap that separates it from these models. Like other Pixma in this range, the TS9150 also supports Wi-Fi Direct and the leading cloud printing services.

Whether you use it from a computer, a tablet or a smartphone, it will always respond. Especially since the application Canon Print has improved over time and offers everything that you can expect from a modern photo printing app. For example, you can easily connect a Facebook or Instagram account to retrieve photos, and the list of supported formats and papers is comprehensive, including the 13x13 Polaroid launched last year by Canon.

If like its little sisters, the Canon Pixma TS9150 draws a line on the USB host and presents in front a SD card reader (the NFC module has however disappeared). Does enjoying an even bigger touch screen make a real difference? No. Quite honestly, the TS8050 / TS8150 is already quite large and readable enough to be perfectly enjoyable to use. It is always a plus, but here too, the difference is not enough to justify such a difference in price.

The main paper cassette, located at the front, can accommodate 100 ordinary sheets (80 g / m²). It is surmounted by the motorized drawer which receives the printed pages. A practical system and again quite compact, which only fails to ask a big dozen seconds to unfold. Note that it can be left out when the printer is turned off to save time.

A second paper feed is located on the back of the printer. It compensates for the absence of a second front cassette, as previously found on high-end Pixma. This new system seems less practical, but allows however to keep permanently available a second type of photo paper for example - provided you can leave this unfolded pane. This forces the printer to take off from the wall a good ten centimeters, while preventing it from being installed in a shelf space at the limited height. 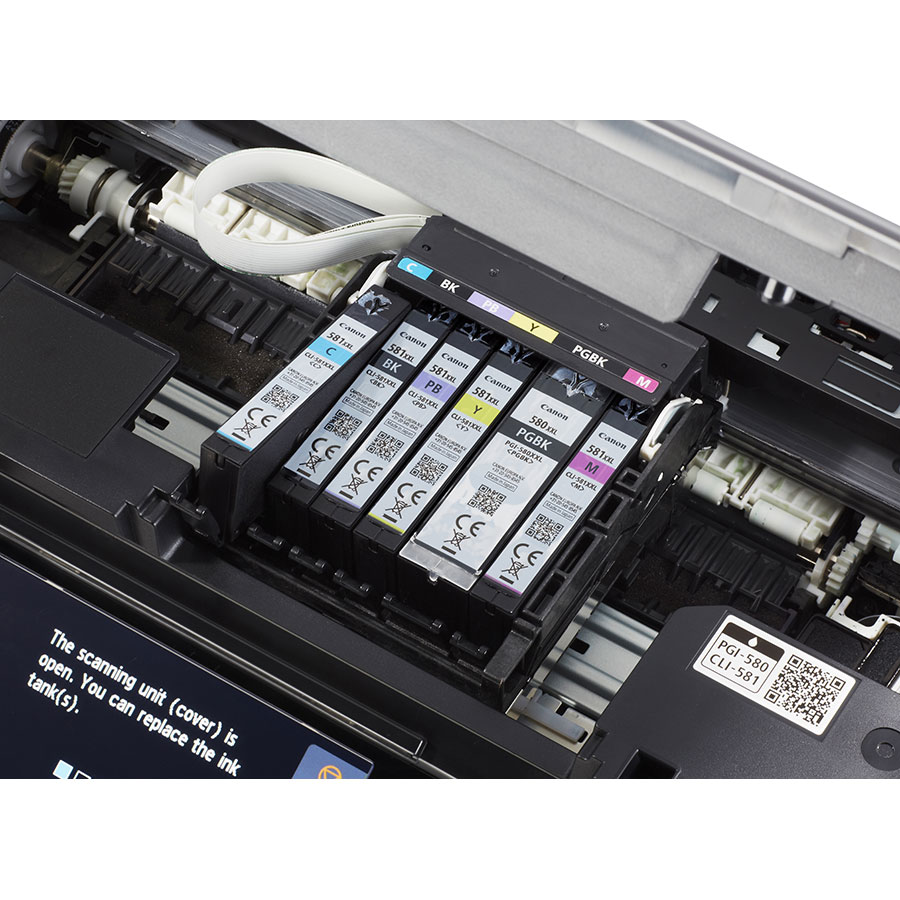 The power consumption of the Pixma TS9150 is consistent with that of the Canon printers in this range: 1W in standby and 19W in A4 photo printing. No good or bad surprise at this level, knowing that on this aspect, the Epson models of the Expression Home range are the ones that impressed us the most lately (9 W in photo printing for the XP-445).

In terms of sound emission, no revolution either: the sound level measurements are close to those found on the TS8050 with 38.3 dB in photo and 39.4 dB in office. This remains, for once, a very good point: this Pixma TS9150 printer clearly ranks on the side of the quieter models that we have tested in recent times. Pixma MG, for example, was much more audible. 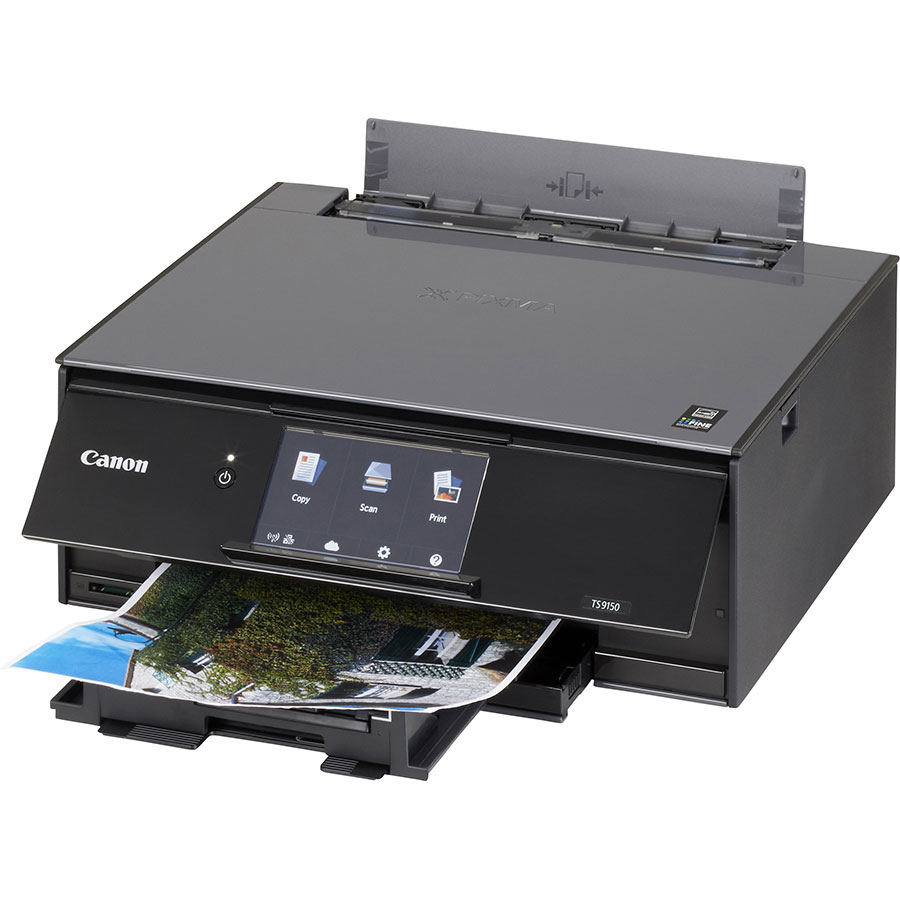 The flatbed scanner on the TS9150 can scan up to 4800 x 2400 dpi at 48-bit. It takes 12 seconds to scan a 10 x 15 cm photo in 300 pp and 8 s to do the same with a 100 dpi document. This is, to the nearest second, the same results as the TS8050 photo and a second faster for the document. The quality of the digitization is identical. Copies are also fast: 11 s for a black and white document, 13 s for a color document. As always in copy, we lose a little bit of original documents, especially on colors, but everything remains perfectly legible.

But as always in photo, we finally attach much more importance to the quality of rendering than flow rates. Unsurprisingly, the rendering is excellent. However, if one sticks to the analysis of the colorimetric drift, the TS9150 is a little less faithful than the TS8050, and even as the Pixma MG7750. The average delta E measured here is 5.8, against 5 for the TS8050 and 5.3 for the MG7750 (the lower the number, the more accurately the measured colors are true). Surveys, on the other hand, are relatively uniform, and the whole remains one of the best on the market. In terms of sharpness and overall rendering, the photos printed by this printer are irreproachable.

In office, on this range, Canon retains its strengths and weaknesses. In terms of data rates, the TS9150 is given for 10 pages per minute (ppm) in color and 15 ppm in black and white. We found actual flow rates of 6.2 ppm in black and white and 12.5 ppm in color on our test documents. In both years, there was an increase over the TS8050, which had flow rates of 5.7 and 7.8 ppm, respectively. So we get good color performance, but in black and white, the printer is still penalized by the many pause times required to dry the ink to prevent overflow or transfer. Finally, in office, the prints are of excellent quality: contrasting, clear and precise, including texts on white or colored backgrounds or gradients and flat colors that are perfectly rendered.

On and ready to print, the Canon Pixma TS9150 takes 8 seconds to release its first page in black and white. When leaving the standby mode, the printing of the same page takes 13 s, and 22 s if the printer was previously switched off.

The Canon Pixma TS9150 is an excellent multifunction inkjet printer that, if one sticks strictly to its qualities of use, deserves its five stars. However, if we add to this observation the price component, it becomes difficult for it to justify a significant extra cost compared to the TS8050 or the TS8150, which, with a few details, offer the same functions and performance, but are much more affordable.