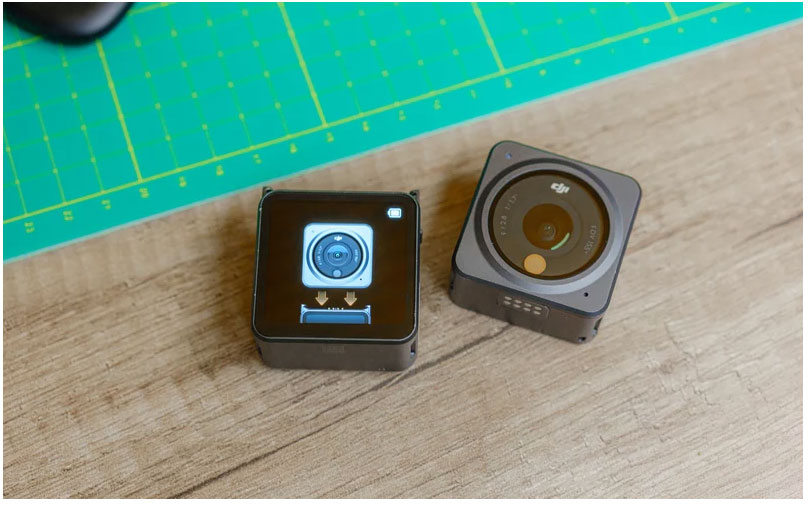 Well known on the drone market, the Chinese firm DJI is also very interested in action cameras. A little more than two years after an interesting Osmo Action, DJI is back with the Action 2, a miniature and modular camera.

We have to admit it, in the field of miniature cameras, the term "GoPro" is almost more used in the common language than the official name "action-cam". The American company is taking over the sector it almost created.

However, despite this somewhat closed market, some manufacturers more or less known try to shade GoPro. For example, for a little over two years, DJI, the world's leading consumer drone sales company, has been offering products that step on GoPro's toes. In addition to the small stabilized Osmo Pocket and Pocket 2 pods, DJI also markets the Osmo Action, a well-finished action cam that offered some unusual options when it was released, such as a mini video feedback monitor on the front panel.

Two years later, DJI returned to the industry with the Action 2. Like the Pocket 2 pod, the camera has lost the Osmo name, as DJI apparently seeks to simplify its products. And this simplification is not just in the name. Far from looking like a traditional action-cam, the Action 2 offers a more minimalist design. Without being very bulky products, action cameras often adopt a common format of small rectangular block quite easily recognizable. It reminds in this sense, the GoPro Hero4 and 5 Sessions, which also adopted in their time a small cube format.

With the Action 2, we are in the presence (in its most contained version) of a small cube that looks more like a big die than a camera. This new format is in itself quite attractive. To this, DJI adds a magnetic connection allowing to hang a panel of accessories to the main module. The goal is to offer a camera that is as compact as it is modular.

Opposite the Action 2, the main rival is the Hero10 Black from GoPro. The San Mateo-based company has been offering larger, but no less powerful cameras for several generations now. The Hero9 Black is not to be underestimated either. We can also think of the Insta360 ONE R, another modular and Chinese camera. Finally, the first born of DJI, the Osmo Action still has something to say. 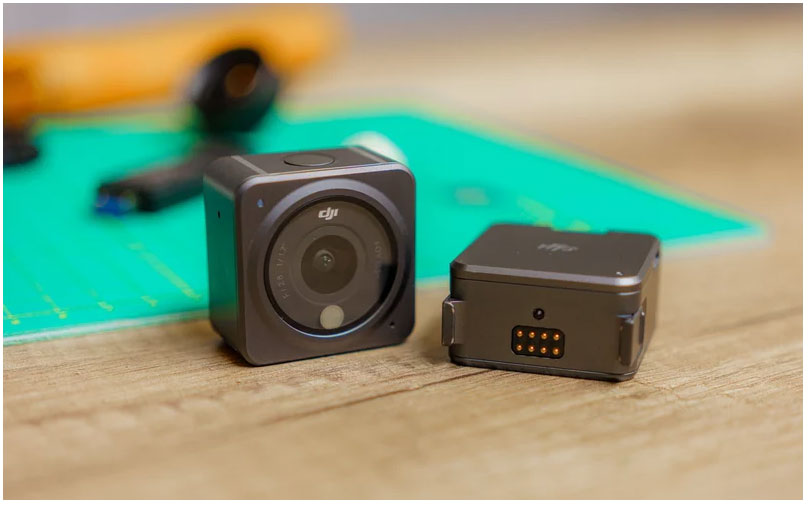 Like the Insta360 ONE R, the DJI Action 2 does not look like an ordinary action camera. The camera itself is just a small block, 4 cm square and 2 cm deep. It weighs 56 grams, the weight of an egg. The all-metal construction inspires confidence. The integrated 1.76-inch Oled monitor offers very satisfactory brightness, color and responsiveness. You just have to deal with the smallness of the screen, which does not always allow easy navigation in the menus.

There is only one physical control on the Action 2. A button to do everything that is used as much to turn on / off the camera, to launch the recording of a sequence or take a picture. The base of the camera has a few connectors to plug in accessories, some of which are attached to the notches on the sides of the camera. And that's all. No USB port, no microSD card slot. And for good reason, the Action 2 relies on an internal memory of 32 GB. To recharge the camera, as to add an extension of storage or battery, it is necessary to attach additional modules.

Thus harnessed, the weight of the camera is around 120 grams, but it remains lighter and more compact than the GoPro Hero10 Black. It is then necessary to fix the small hooks located on the sides of the Action 2, the magnets not being strong enough to maintain the two blocks together permanently. These small hooks are not always easy to engage and, like a temperamental USB key, it is sometimes necessary to repeat several times before locking two parts.

In the register of complaints, we will point out the magnetic connection. Although it contributes to the successful design of the Action 2, as mentioned above, it is not always very reliable. To take a concrete example, it is possible to wear the camera as a pendant around the neck thanks to a necklace that can be slipped under an item of clothing (in the manner of Insta360's GO 2) and securing the whole thing with a small additional piece. However, if you do an activity a little too lively such as biking or skiing, you expose yourself to a potential drop of the Action 2.

This is a real concern, which can be amplified if you use the camera with a secondary block. In which case, dropping is almost certain in the short term. So this modular construction is not without its problems. To justify this simplified design, DJI explains that it responds to users who find that there are too many superfluous gadgets in the competition. We can share this point of view, that being said, if the main module is minimalist, as soon as you want to hang it on a stand, a selfie pole, or a drone, it is appropriate to affix an additional tool. Similarly, for reasons of autonomy or storage, you have to play the Lego game.

This can also be a problem when it comes to waterproofing. If the basic module is waterproof without any protection up to 10 meters, the secondary modules (battery only or battery + screen) need a casing! They don't have any security flaps for the USB ports or for the microSD card. A design error that forces the Action 2 into a bulky case and makes the camera lose its compactness. It is difficult to know why such choices have been made, but they undermine DJI's initial claim of simplicity of use.

Limited by the 32GB internal storage, it suffers from a real heating problem. This considerably limits the recording capabilities of the camera, which makes it difficult to use in conventional use.

If it is possible to use the Action 2 without the help of a smartphone, it is quite easy to rely on the DJI Mimo mobile application. Once connected, it becomes possible to control the camera remotely without difficulty. We can also transfer the files contained in the main module. A function not so insignificant when you know that it is mandatory to connect the camera to a secondary module to benefit from the USB-C port. 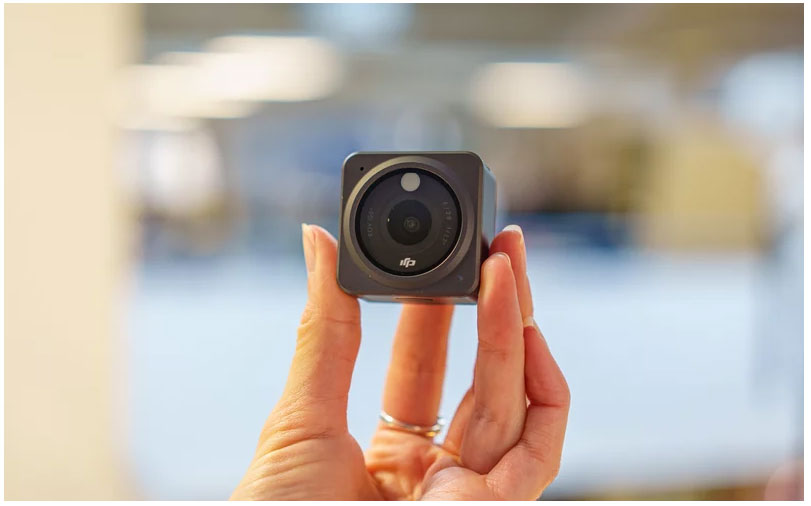 By default, the images offer a colorimetry "Normal" with a fairly faithful rendering. Those who find this mode too saturated can opt for the "D-Cinelike" profile which offers a much more neutral image and that post-production enthusiasts can modify as desired.

The only real lack to this Action 2 is a format higher than 4K. At GoPro, the Hero10 Black offers recording up to 5.3K, always useful for cropping. For the rest, the image of the Action 2 is quite good, but it does not reach the level of the ONE R of Insta 360. With an equivalent format, the ONE R simply offers a richer and more detailed image.

To correct distortion, DJI still uses the Dewarp function, which corrects the distorting effect of the very wide angle. The latter proves to be very effective and manages to adjust the appearance of the video without losing too much in quality despite the significant cropping.

This being said, the camera does not manage to maintain the recording durably in 4K, we finally based our note of image quality on Full HD, which mechanically offers less detail than 4K.

The stabilization, called Rocksteady 2.0, has two types of corrections. The Rocksteady is a classic "crop" in the image that did not seem more advanced than that of the Osmo Action. It works in all formats and does a decent job, but is not yet at the level of what GoPro offers. In addition to this stabilization, DJI also incorporates a horizon holding system (Horizonsteady). This function will further crop in the image to compensate for the camera's roll.

An interesting function, but not necessarily as accomplished as on the Hero10 Black. Moreover, the latter is only available up to 2.7K and 60 fps. We could observe quite a lot of vibrations in the image, especially when the brightness drops slightly. If you have to shoot any kind of lighting, it will even be easy to see these shine more than reason.

From ISO 800, in Raw, a digital noise starts to appear, but it remains quite manageable until ISO 1600. After this level, the noise becomes too present. In Jpeg, the same problem appears, but with a smoothing in addition. The processing is more visible at ISO 800 and remains acceptable up to ISO 1600. Beyond, the image loses irreparably in quality.

The DJI Action 2 is a well finished miniature camera that does not lack aesthetic charms. Of course, it loses a little in practicality when you attach its secondary modules. Moreover, the image quality is quite good and we appreciate the new stabilization functions. All this being said, the Action 2 suffers from a big flaw: its heating. In the most demanding modes, the camera heats up so much that it shuts down in a few minutes, while having happily dipped into the battery. And even if you lower the definition, the life span is only a few minutes. We find ourselves in the presence of a beautiful action-cam, but hardly usable. 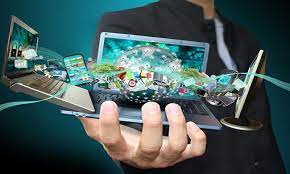