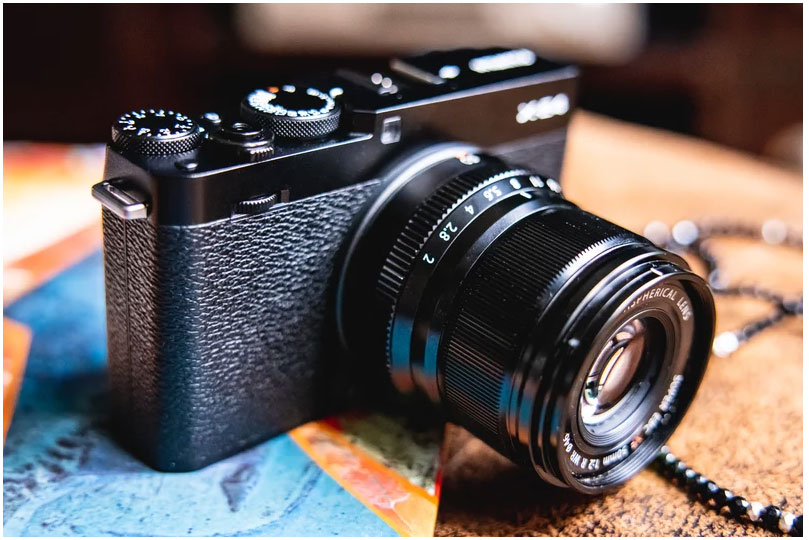 Fujifilm's X-E camera series is displayed in a range finder style. The viewfinder placed on the left side refers to the rangefinder found on the M10 from Leica. The Fujifilm X-E4 uses the 26.1 megapixel X-Trans 4 CMOS sensor that we have already seen on many cameras in the range.

Negative points
- No stabilization of the sensor.
- No resistance to moisture and dust.
- Storage limited

Among the new features, the famous retro design evolves in a notable way. The rear screen is now multi-touch and rotates 180° for selfie use. However, the sensor stabilization and weather resistance are still missing.

Competing with the X-E4, we can obviously mention the EOS M6 Mark II from Canon, which also has a rectangular design. Let's not forget to mention Sony's APS-C sensor hybrids, including the Alpha 6400 (A6400) which offers some similarities. Obviously, the "philosophy" of the X-T30 is different, but it is also a serious candidate in a similar price range. For 35mm enthusiasts, the X100V is also a very good alternative.

Fujifilm or the art of photography

Fujifilm has decided to propose an approach of the photographic practice based on manual adjustments. This may seem complex at first, but will appeal to some photographers. Thus, many lenses have a ring to adjust the diaphragm, while the camera has a barrel to adjust the speed; some more expert cameras offer additional settings, such as sensitivity.

Playing with both settings allows you to switch to manual, aperture priority or shutter priority mode. With its excellent X-S10, Fujifilm chose a more widespread approach, perhaps to appeal to a new audience. Here, the X-E4 takes the codes of the brand and hopes to seduce photographers who are adept at this type of practice, as well as those who want to own a beautiful object.

Because, yes, the X-E4 is very well built and successful, as much by its finishes as its design. Compared to the X-E3, its lines are less rounded and more angular, reinforcing the range finder look. The X-E4 is a little smaller and a little lighter than the X-T30.

Fujifilm goes all the way with this change and completely forgets the grip and thumb rest. The identity of the X-E4 is strengthened, undoubtedly affirming its character. Unfortunately, the X-E4 becomes a little soap that is difficult to handle with one hand without a strap. To alleviate this problem, Fujifilm removed a button from the back panel to free up space for the thumb, but this does not completely solve the problem.

That said, without offering too many options, the X-E4 is still an excellent camera. We might miss a customizable button or two, but that's a matter of taste. On the top right, a customizable button remains, while the Q button - for quick access to many of the settings - is moved to the top. Let's not forget the touch gestures that can be activated to call a particular option.

A small regret, the protrusion of the power switch is not sufficiently marked for a practical use. It's a pity that Fujifilm didn't copy the improvement brought to the X100V. We can also notice the absence of a rear wheel or the controls a little too small, even for an average size hand.

With 2.36 million points and a magnification of 0.62x, the electronic viewfinder is of good quality. We regret however a narrow viewfinder. The screen becomes a multi-touch screen, except for navigating in the menus. Orientable vertically up to 180°, it allows easier shots in low-angle or to make selfies.

On the connectivity side, there are micro, USB-C and micro-HDMI sockets, all protected by a very well-made trap door that Fujifilm has the secret. Wi-Fi and Bluetooth are also present. Recharging via the USB-C port is possible, as is power during the shooting; this is an excellent point. On the other hand, access to the SD memory slot - limited to the UHS-I bus - is through the bottom of the camera, which can be a problem when using a tripod. 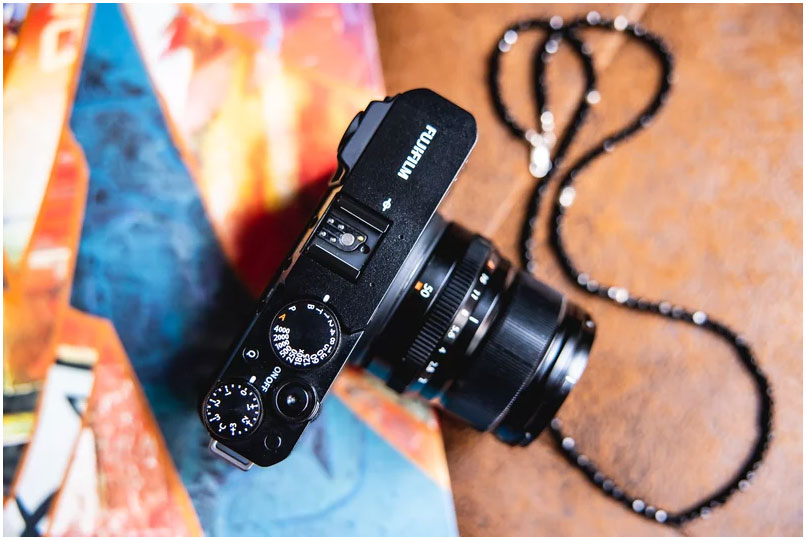 The general reactivity of the X-E4 evolves in the good direction compared to the preceding model, but does not revolutionize the kind either. The start-up time is almost one second and the autofocus is penalized in low light. Let us also note, like the X-T4, that the autofocus can have difficulty in certain circumstances when changing shot. This point is amplified when the light is missing, even if the situation is rarer in the field than in the lab. For the rest, the X-E4 goes very fast. The autofocus is very responsive, as is the camera in general.

The burst is announced by default at 8 fps in its highest speed. Fujifilm keeps its promises. To benefit from a higher speed, it is necessary to use the electronic shutter which grants a speed of up to 20 fps, and even up to 30 fps in exchange for a 1.25x crop. Like Olympus, Fujifilm offers a Pre-shot mode to shoot before the shutter release to optimize the chances of capturing a fleeting moment.

On the other hand, the camera's buffer is limited to less than 20 Raw in the fastest speeds. This is not enough, even if one could argue that the X-E4 is not necessarily intended for sports photography. Problem is, the limited UHS-I bus of the SD card does not help to save images. The camera is still usable while writing. Finally, a sport mode brings a better fluidity of the viewfinder; note in passing that no black veil is to be deplored between shots.

As on its previous cameras (X100V, X-T4 or X-T30), Fujifilm offers eye and face detection and tracking on the X-E4. When the subject is too far away or really too close, the detection algorithms can have trouble, which we already noticed on other cameras of the brand. However, once the subject is back in the comfort zone of the camera, the autofocus is formidable, especially for portraits.

No surprise on the side of image quality in photography, quite the contrary. Fujifilm renews its X-Processor 4 couple associated with the APS-C CMOS X-Trans 4 sensor of 26.1 megapixels. The overall performance of the X-E4 is very similar to the X-T30, the X-T4, or the X100V.

The images are very good up to ISO 800. A first level of noise is reached at 1600 ISO. Whether in Jpeg or Raw, it is from ISO 3200 that we notice a first strong degradation. On Jpeg, Fujifilm chose a relatively important smoothing, when the RAW file lets appear a light grain. The result is nevertheless consistent with Fujifilm standards. The ISO 6400 threshold adds a dose of noise and image degradation. The extended values are to be reserved for exceptional situations.

To check the extent of the work from an "artistic" point of view, we photographed our test scene on a range of +/-5 EV and corrected the raw files with our retouching software to obtain a similar exposure.

On the available dynamic range side, the X-E4 renders an almost carbon copy of the X-T4. Highlight recovery is limited to +1.6 EV. The underexposure correction shows noise from -3 EV. It is at -4 EV that it will be more noticeable. On the positive side, there is no color drift.

Integral part of Fujifilm's DNA, the color profiles allow to modify the rendering of the captured Jpegs. No less than 18 simulations of silver film are included and can strengthen - or soften - the colors directly at the camera output. Some parameters are also adjustable.

The video of the X-E4 follows the direction of the brand, but will not position itself as a reference in the field. We note however the presence of the 4K DCI format (4096 x 2160 px) in addition to the more traditional UHD format with a 16:9 ratio. With a bit rate up to 200 Mbit/s, a 60 fps rate absent in 4K and a sampling limited to 4:2:0 bits internally, the little hybrid does not revolutionize the genre, but offers a sufficient performance.

Nevertheless, there are several useful options such as the zebra to adjust the exposure or the F-Log profile to optimize post-production. In the latter case, the minimum sensitivity is ISO 640. Another positive point is that there is no cropping, even in 4K.

For image quality, the X-E4 is better than the entry-level hybrid X-T200 and offers a performance similar to that of the X-T30 or the Alpha 6400 (A6400). Beware of the lack of mechanical stabilization of the sensor which is always a problem when capturing animated sequences.

Rolling shutter - distortion of the vertical lines during rapid lateral movement - is clearly visible, but relatively contained in 4K. It fades considerably in FHD and will rarely be a problem in this case. The autofocus is excellent. Reactivity is very good, even with eye and face detection. The tracking is not always perfect, especially during rapid movements. For all that, the point is generally well made on the subject. 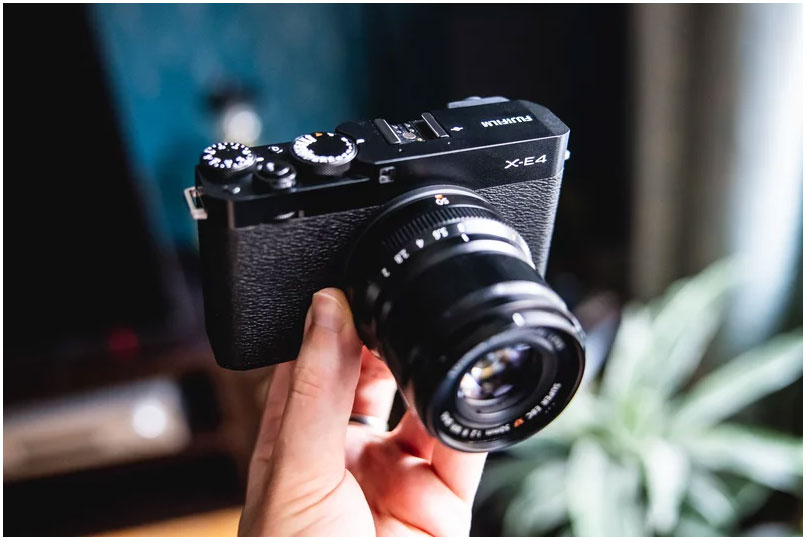 Fujifilm made a daring choice by sacrificing part of the X-E4's handling on the altar of design. A choice that should be taken into account before use. Nevertheless, the X-E4 has a first class finish and its successful design will not fail to seduce. Fujifilm also improves the body compared to the previous model and offers a very effective performance thanks to the sensor found in the X-T4 and which allows the X-E4 to deliver a good image quality. All this is accompanied by a responsive autofocus, both in photography and video. Characteristics common to the "X-E" series that make the X-E4 a well thought hybrid that we enjoy using. Among the competition, the Alpha 6400 (A6400) from Sony offers a solid performance in photo and video, but with a completely different design and photographic approach. 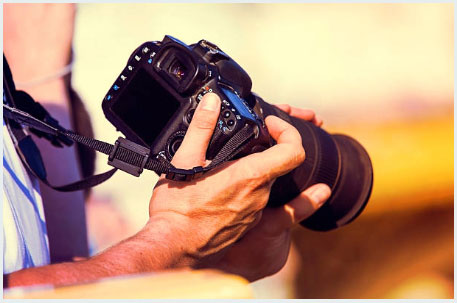