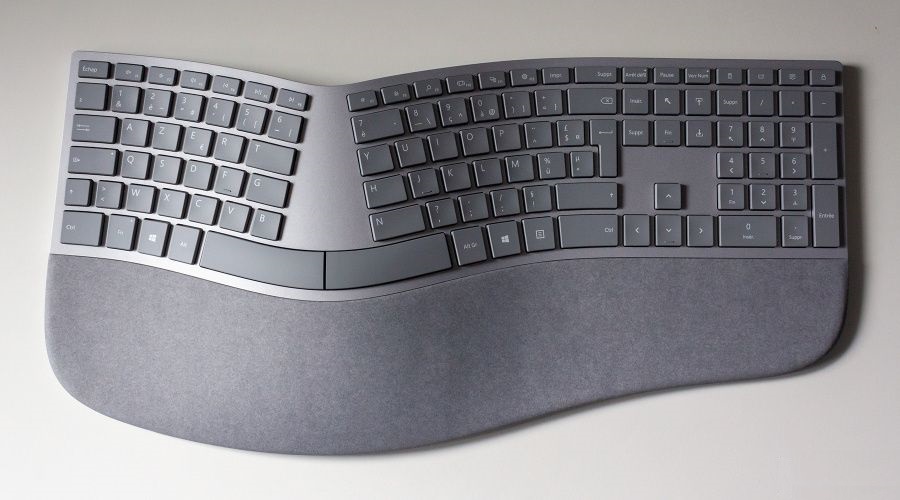 The soberly named "Surface Ergonomic Keyboard" from Microsoft is not a keyboard like any other. "Designed for productivity and advanced comfort", according to Microsoft, it aims above all to preserve our wrists by providing a layout of the keys in an arc and two separate blocks, and a curved frame at the base of which is located a wide, foam-covered palm rest with alcantara finish. What offer maximum comfort to users who spend many hours hands on their keyboard. 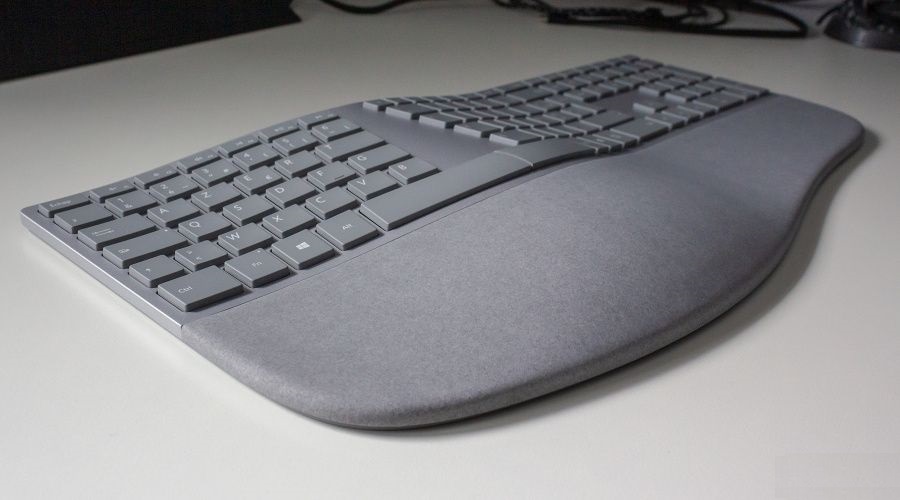 At first glance, the Surface ergonomic keyboard detaches from the majority of desktop keyboards on the market. Rather massive in appearance, it is not so imposing as one could fear at first, thanks to the rather thin edges, about 6 mm. Its size remains fairly standard with a length of 460 mm for 229 mm width and a height of 35 mm at the highest point (no feet to raise the keyboard here). It is finally the large palm rest that occupies about 9 cm on the bottom of the keyboard that gives this massive impression, but that we do not regret a second once we put his hands.

The curved shape and wide palm rest invite anyway to manipulate this surface ergonomic keyboard without further delay, to find out whether or not it is worth to upset a little habits. First observation, despite a plastic construction, the quality of workmanship is neat and it does not feel like having under the hands a keyboard first price. The metallic finish contributes to this good impression. Admittedly, the chassis bends a little if you force a little on its top, but that does not affect the hit.

It is especially the palm rest that seduces the most and gives the keyboard its character. Covered alcantara under which hides a fairly dense layer of foam, it is certainly a highlight of the Surface ergonomic keyboard. However, care should be taken to wash one's hands and remove the cup of tea or coffee to preserve its aesthetics, since this material is less easy to clean than a plastic or even as imitation leather, for example.

The hands naturally find their place above the two separate blocks of keys and oriented in the axis of the forearms. Objective: not to impose any twist of the wrists or fingers so that the joints do not suffer. It is the basis of ergonomic equipment, it is to respect as much as possible the natural position of our members to limit fatigue and avoid trauma.

This is not uncompromising compared to what we usually know about computer peripherals. Indeed, the keyboards that we use are mostly irremediably straight, with well aligned keys. A provision that obviously simplifies their design and manufacture, but would be truly comfortable if we could place our arms well in front of us and parallel to each other. Lack of luck, the human body is not really suitable, we have shoulders and a bust, obviously forcing our arms to move inwards and thus to rotate our wrists to find the horizontal axis of the keys. In short, just look at the position of your wrists when you tap to realize it, they probably do not stay in the axis of your forearms, which can cause injury during prolonged and regular use .

To remedy this, most ergonomic keyboards offer buttons oriented in the axis of the arms, so that the wrists have the least possible to rotate. Others go further by dividing the keys into two blocks, one for each hand, sometimes even two physically separate frames. If the Surface ergonomic keyboard does not go that far and remains a single block, it adopts the other ergonomic principles with some success.

Thus we find 15 keys of the alphabet on the left and 11 on the right, the separation being done equitably between the keys on a line starting from the keys of functions F6 and F7 to end in the middle of the Spacebar. In fact, the latter is divided into two distinct keys that are activated in the same way with the thumbs. This particular provision is not without consequences on typing habits that can be acquired with a traditional keyboard, as we will see in the chapter on quality typing. 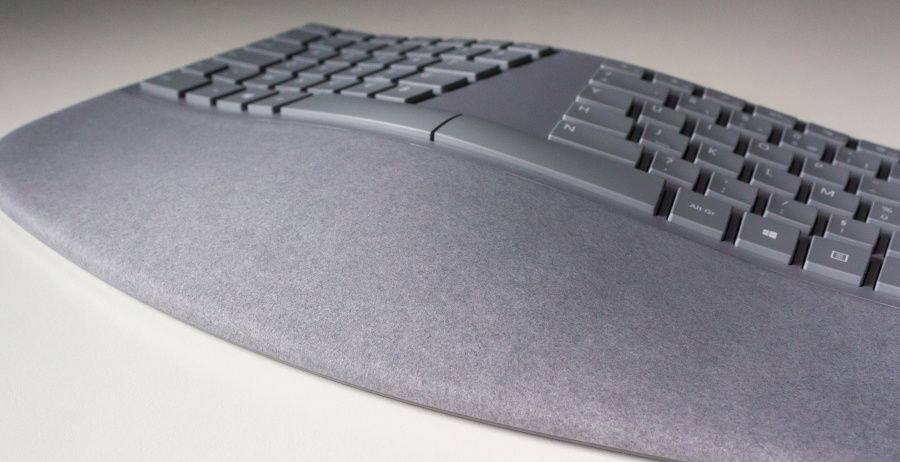 Except for its ergonomic specificities, this Surface keyboard does not have anything really different from another Microsoft keyboard. There are shortcut keys at the top, mostly arranged on the function keys themselves (sound volume, navigation between tracks, playback / pause, adjusting the brightness of the screen, Windows functions ...). These are then used in combination with the "Fn" key.

In terms of connection to the computer, only Bluetooth (4.0 / 4.1 low power) is available. Although we can understand this choice, being a keyboard range Surface designed for computers that always have Bluetooth, we would have appreciated to also use this keyboard with a radio transceiver, or even with a USB cable directly, for security in case of wireless connection problem. The range is of the order of ten meters (depending on the obstacles between the computer and the keyboard) and 2 AAA batteries provided ensure up to 12 months of use, according to Microsoft. In addition, 128-bit AES encryption is used to secure the transmission and prevent data theft.

Battery operation requires, it must happen to backlighting keys (too greedy energy). The use of a battery of good capacity would have allowed this use. As it is a purely desktop keyboard, which will not normally be used in complete darkness, it is not a critical point. 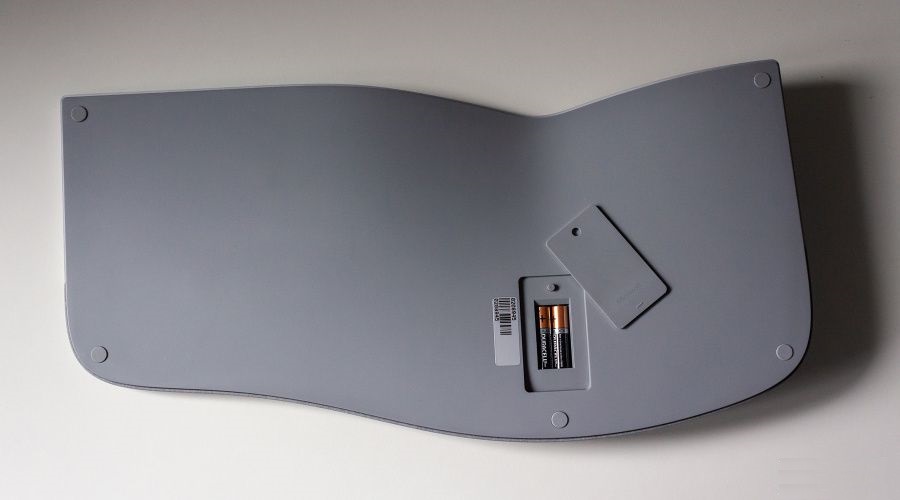 This is the question that everyone asks with such keyboards: is it not too difficult to adapt to such a provision keys, two separate blocks and curved. Fatally, we will not lie, it takes a bit of time and on this type of keyboard even more than with a classic right keyboard, the ideal is to know how to type 8 or 10 fingers, in order to enjoy maximum of such an arrangement of keys and thus move the hands as little as possible. If this is not your case, plan a few good hours of learning to take full advantage of this keyboard.

Aside from this habit, this Surface ergonomic keyboard is not particularly critical. Its scissor switches provide a fairly firm and responsive typing. The touch is good and the striking is done in silence. As often, alas, it is the spacing keys that we hear the most. Microsoft has not been able to sufficiently mitigate their noise, despite their shorter length. It is also regrettable that the key "entry" is not greater. There too, it will get used, especially since its separation with the key "Delete." to his right is not wider than that of the other keys.

In terms of lifespan, Microsoft announced 10 million activations for switches classic azerty keys and only 500 000 for others (additional keys and multimedia). It remains far from the 50 million or more mechanical switches, but this remains satisfactory for scissor switches that use rubber domes.

Comfortable, well finished, the Microsoft Surface Ergonomic Keyboard will delight users who hit long hours on their keyboard and can suffer wrists. If it inevitably requires a phase of adaptation to get used to the layout of the keys, it turns out convincing once the fold taken.