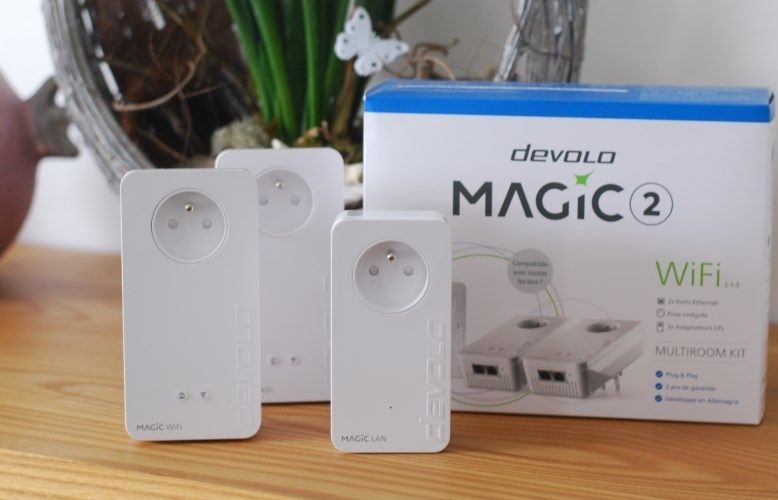 The Devolo Magic 2 WiFi is the first CPL kit to promise a theoretical 2.4 Gb/s powerline. It also acts as a Wi-Fi hotspot, ideal for bringing wireless wherever it does not usually go.

Devolo is the first network equipment supplier to offer a powerline kit based on Gigabit Home Networking (G.hn). What to claim a theoretical throughput of 2400 Mb/s, where the best adapters are limited to 2000 Mb/s through the standard HomePlug AV2. If it is supposed to be faster, this kit is especially totally incompatible with existing PLC adapters. Clearly, it will not extend a PLC network already in place since it will be unable to communicate with HomePlug AV blocks. This applies equally to CPL blocks previously purchased commercially or those delivered with some ISP boxes - notably Free's Freeplugs.

The Magic 2 WiFi series comes in the form of kits including a classic PLC block - named "Magic LAN" - and one or two Hybrid Magic WiFi CPL blocks. It is possible to complete these kits with additional Magic WiFi modules. Because one of the key points of this series lies in its ability to offer a Wi-Fi network type "mesh" as offered by Wi-Fi systems Netgear Orbi or TP-Link Deco M5.

If the basic idea is the same - to provide homogeneous and strong Wi-Fi coverage in all rooms of a home - the topology differs somewhat. Indeed, in this case, we will connect the Magic LAN adapter directly to the router with a network cable, then this model will dialogue with the Magic WiFi module (s).

With almost 15 cm high and 7.5 cm wide, the modules of this kit are among the largest on the market. Luckily, Devolo took care to integrate two earth sockets on his blocks, which makes it possible to connect them body up or body down. A practical point when wall outlets are not necessarily well placed. Each block also has a female electrical socket. It is also quite useful, since it allows to connect a power strip or any electrical device on the blocks, which do not therefore condemn the electrical socket on which they are connected. The Magic WiFi modules also have the good taste to offer a two-port network switch.

The commissioning is quite simple since the blocks are paired with each other automatically. The configuration then goes through a web interface - for the most experienced - or the application Devolo. In both cases, it is then possible to simply update the internal software blocks and configure more finely, including the Wi-Fi.

Basically, the Magic 2 WiFi kit broadcasts its own Wi-Fi network. If only one SSID is broadcast - as on most Wi-Fi systems now - there are two frequencies that are active (2.4 GHz for Wi-Fi 4 / n and 5 GHz for Wi-Fi 5 / ac). A clone function, however, allows you to resume the SSID and the configuration of an existing wireless network. This is not a question of repeating the signal, but of setting up new "invisible" access points that will extend the signal coverage area.

There is also the ability to schedule Wi-Fi on and off on time slots as well as a parental control system. Very basic, it is only used to restrict access to the network of a given device on specific time slots. Finally, an option named "Config Sync" allows you to send the configuration of one Magic WiFi block to another. Very handy when adding a new module.

As usual, we conducted our tests not in the laboratory on specific electrical cables, but in a typical house - the same house being used for all network product tests. In absolute terms, the powerline result is quite good since the Devolo Magic 2 is one of the best PLC adapters on the market, without exceeding them. The average is thus 210 Mb/s (26 Mb/s) and the maximum reached is 379 Mb/s (47 Mb/s). The average is also marked by a worse than expected result on the 5th and last measurement point of our home (97 Mb/s or 12 Mb/s).

However, we expected more from this kit which claims 2,400 Mb/s theoretical. Of course, our experience prevented us from expecting a result close to the theoretical rate, but the 20% more displayed on the box compared to the best HomePlug AV2 blocks - limited to a maximum of 2000 Mb/s - let hope something even faster.

As mentioned before, three versions are on sale. First of all, there is a kit comprising two Wi-Fi blocks and a single CPL block under the name "Multiroom kit". Then comes a kit containing a single Wi-Fi block and a block only CPL under the name "Starter kit". Finally, there is also the Wi-Fi module sold individually as "Single". The warranty is 3 years for all kits.

Fast in CPL, fast in Wi-Fi and simple to implement, the kit Devolo Magic 2 is rather convincing. The possibility of easily setting up a mesh-type wireless system is also really interesting. It is not perfect, however, because it is among the most energy-consuming on the market. The first kit on the market to run according to the G.hn standard, it is also not compatible with other PLC adapters on the market.