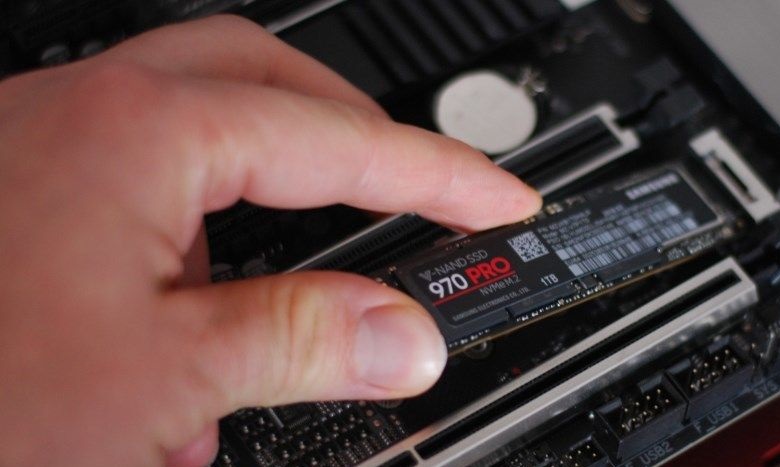 Samsung high-end series, the SSD 970 Pro is a benchmark in the field of flash storage. Indeed, their data sheet has everything bestseller: high speeds, endurance dementia and guarantee to the height.

With each generation of memory chips, Samsung goes for a series of SSD with the suffix "Pro". This does not necessarily limit them to the professional market, but these series are in any case aimed at advanced users, wishing to obtain the best in the market. And it must be said that by scrutinizing the technical characteristics of Samsung 970 Pro, we find all the ingredients of a recipe that looks particularly good.

Samsung 970 Pro SSD are sold exclusively in the form of M.2 2280 modules. They operate on an NVMe interface and a 4x PCIe bus. The 970 Pro is currently only available in 512 GB or 1 TB versions - this is the second version tested here. Under the hood, we find the Phoenix controller already seen on the two sister series, the 970 Evo and 970 Evo Plus. The chip is accompanied by 1 GB of DDR4 acting as cache.

The big difference compared to the mass of SSD that passes us in the hands is at the level of memory chips. Indeed, the NAND TLC is now widespread everywhere and the SSD equipped with memory NAND QLC begin to make a place. The 970 Pro for their part go against the grain since they are based on the use of NAND MLC - 4th generation Samsung NAND 3D MLC. This type of NAND has the advantage of storing only 2 bits of data per cell, which makes it possible to reduce the latencies of access (the rates are increased) and to reduce the wear of the cells (the endurance is higher). The disadvantage is that it takes a lot more memory cells to get the same storage capacity than with TLC or QLC memory. Clearly, the manufacturing cost is much higher.

In the past Samsung had tried the decennial guarantee for its 850 Pro series, so as to best fit its rival SanDisk. Since then, SSD manufacturers have calmed their heat and high-end series are "all" limited to a 5-year warranty, which is the case of the 970 Pro. Writing endurance, on the other hand, is very important since it is 1200 TB. This is equivalent to writing 658 GB of data every day for 5 years. In other words, apart from a use in data center, it will be very difficult to go after these 1.2 Po. As always, it is also a guarantee the first of two terms expired.

Samsung is once again using a multilayer sticker on the back of its SSD. One of the layers of this sticker is made of a thin layer of copper whose purpose is to help heat dissipation. If we have reservations about the temperature rise of the 970 Evo Plus 500 GB, this is not the case here. In conventional use, the 970 Pro 1 TB does not exceed 64°C, whether it is located right next to a graphics card or in a more open environment. The temperature then drops down very quickly below 40°C. We did not notice any throttling phenomenon - the bit rates remain stable, even during large file copy sessions.

We had to do really intensive tests to find the limits of this model. Thus, it is after more than 350 GB of data written in one piece that the temperature has exceeded 79°C, threshold after which the flow is sawtoothed. And even then, the throughput remained high with more than 1.5 GB / s against a little more than 2 GB / s at the beginning of the treatment. Bluffing.

Samsung promises very high performance with 3.5 GB / s sequential reading and 2.7 GB / s write. The write rate is also not subject to a SLC cache since no such system is found on the 970 Pro. This prefigures a steady flow, even when copying several tens of gigabytes of data - within the thermal limits mentioned above.

Under benchmarks, as well as the promise is held on sequential flows. Indeed, whether with a file of 1 GB or 32 GB, we end up with values strictly identical to those announced on the manufacturer's website. Random accesses on small files are also done at a fast pace, regardless of the duration of the test.

No accessory is provided with this SSD that does not really need it. Samsung offers to retrieve the Magician utility on its website. This is used to check the health of the module in M.2 format and, if necessary, to install a new version of the firmware. An NVMe driver is also available for download on the same site. It supports Microsoft Windows 7, 8.1 and 10 operating systems.

The Samsung 970 Pro 1TB is the Rolls-Royce SSD M.2 format. Its flows are both very high and particularly stable whatever the case. Thermal heating, the usual weak link in NVMe SSDs, is also perfectly well managed. Everything is accompanied by a nice guarantee and endurance foolproof. A total success that is paid unfortunately at a high price.