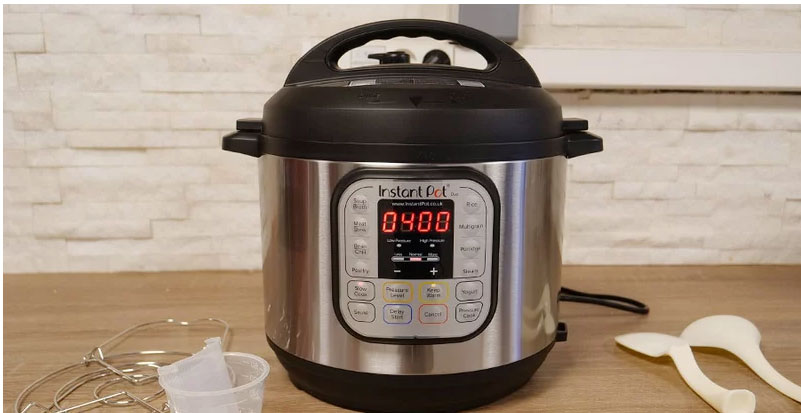 Can this multi-cooker replace the Moulinex Cookeo, which cannot be unrolled in this sector? 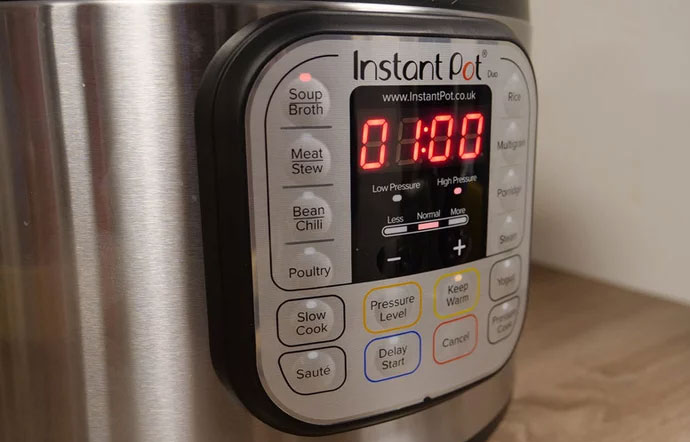 If we had been told one day that a multi-cooker could create so many emulators, it would have been hard to believe. And yet, the Instant Pot is creating a real surge in the United States: this multi-cooker has not only won the favour of many users, but also that of the press. Surprisingly, only one version of the Instant Pot is available in France, while there are about ten in the United States. Could it be because of Moulinex's omnipresence, which has just passed the 2 million Cookeo mark? It's hard to say.... Anyway, we were looking forward to meeting the main rival of the famous multi-cooker of the Seb group. Available for 99 €, the Instant Pot DUO-60 is sold for about 50 € cheaper than its French competitor. This multi-cooker is a very versatile appliance capable of serving a pressure cooker, slow cooker, rice cooker, steamer, yogurt maker and warming plate. 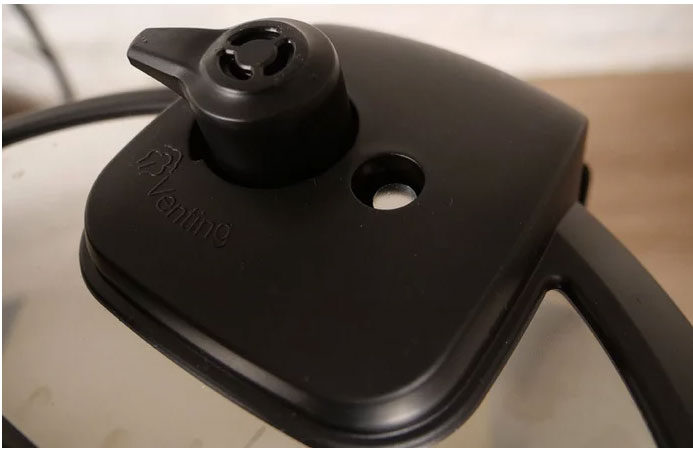 Like a multifunctional food processor, the multi-cooker promises to cook quickly and efficiently. However, these two families of devices do not offer the same services. The multi-cooker does not slice, shrink, cut, grind; it simply cooks under pressure and assists the user in developing his recipes.

Less bulky than the Cookeo, the Instant Pot can be stored in a cupboard more easily than its French rival. It also takes up less space on a work surface. No aesthetic extravagance on the Instant Pot, the finishes are very sober and inspire confidence. This is less true for the control panel, which suffers from a lack of credibility. Quite cheap in its approach, it consists of large physical keys that surround the display. And it's not the little sound that comes from the device when the lid is properly closed that blurs the gadget effect, quite the contrary; this ring is similar to that of Super Mario, which makes a "life" on the GameBoy game.

Let's go back to the physical keys; they are not translated into French and a passage through the operating instructions is necessary to familiarize yourself with the device. They give access to the 14 programs on board the device (double pressure, keeping warm, gentle cooking, temperature options for seizing, simmering or thickening, etc.). The rest of the keys are used to adjust the duration of the programs, start the cooking process or stop it. In the centre, the 8-segment display is nothing like the colour display of the Cookeo. Here, only the cooking times are indicated; it is quite rudimentary.

The float valve is located on the cover of the Instant Pot. Unlike the Cookeo, it is not motorized. Here, it is up to the user to play with the evacuation handle to release steam and lower the temperature at the end of the cooking process. In use, the Instant Pot therefore requires a more in-depth knowledge of cooking and baking. And that's the difference with the Moulinex Cookeo, which completely relieves the user of these manipulations.

In the case of pressure cooking (which concerns all programs except Slow Cook, Sauté and Yogurt), the user has the option of changing the pressure level (High or Low). By default, all programs (except "Rice", for rice) are set to High pressure level. Before starting his program, he must necessarily turn the handle to its "Sealing" mode. Baking starts automatically 10 seconds after pressing the last key: the screen displays "On", and preheating begins. As the heat and pressure increase, the valve lifts. Once the pressure is reached, the multi-cooker switches to the cooking cycle and displays the remaining cooking time. At the end of a cooking process, the user has two options: proceed with a "natural" evacuation - the Instant Pot must cool down drastically for the valve to come down, but this process may take some time - or prefer a faster evacuation and turn the steam evacuation handle to the "Venting" position to release steam and cause the valve to come down. Let us remember some common sense precautions: avoid touching the handle when the steam is released, you could burn yourself badly. When the pressure cooking cycle ends, the Instant Pot beeps and automatically switches to warm-up mode.

The default cooking time is given as an indication and to avoid overcooking a food, it is necessary to refer to the recipe book (not very tasty) in order to refine the ideal cooking time. For pressureless cooking (Slow Cook, Sauté and Yogurt), it is important to leave the handle in its Venting mode. Finally, a word about the very comfortable 6-litre stainless steel tank. Its non-stick coating does not catch the preparations, but for reasons that we do not understand, this bowl does not have side handles - unlike the Cookeo. It is a heresy: to get the bowl out of its place when it is hot, you must necessarily bring a cloth or potholders, otherwise you can burn your hands. The lid of the pressure cooker is easily positioned by screwing it onto the tank. It is topped by a large handle that makes it easy to handle. 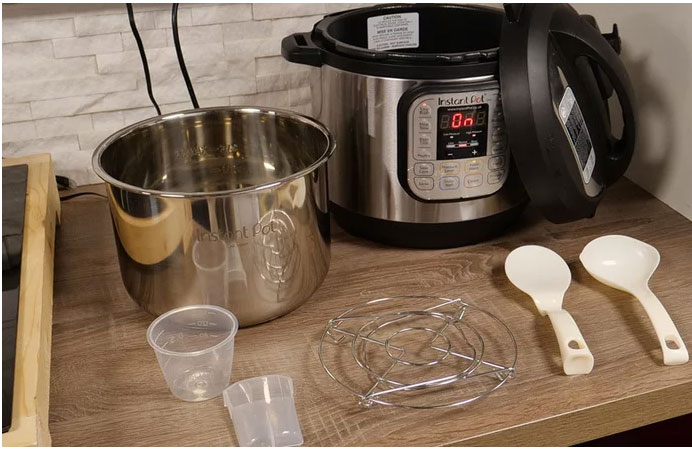 The maintenance of the Instant Pot is quite simple. The tank is very easy to clean with a sponge and is also dishwasher safe. The same applies to the cover, from which the gasket can be removed for more careful maintenance.

However, the cover of the tank collects condensation. When it is extracted from the bowl, it tends to taste, and as it is quite large, the drops escape all around the robot and on the work surface. It's not ideal. The opening system of the Cookeo, inclined like a trapdoor, prevented this phenomenon. The outer part of the Instant Pot can be cleaned with a damp cloth and the pressure valve with a dry cloth. 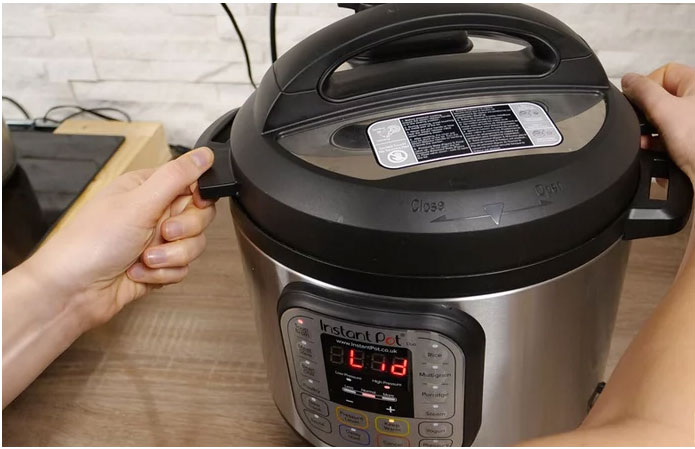 To ensure cooking performance on this appliance, we have recorded the temperatures for gentle cooking, simmering, pressure cooking and seizing (for example, when cooking meat). For the first three firings, we put 2 litres of water in the tank before first measuring the preheating time and then the temperature reached. When programming the Instant Pot in its Slow Cook mode, the appliance sets an automatic cooking time (4 h) that can be adjusted at will up to 24 hours (compared to 120 minutes in pressure cooker mode). On this program, the evacuation handle must be in Venting mode. The Instant Pot takes 25 min to reach 82 °C and stabilise the temperature. It is 5 times longer than Cookeo on this exercise. And by the way, we remind you that the temperature of a gentle cooking must not be higher than 80 °C.

For the simmering, the Instant Pot took 13 minutes to reach 100°C and stabilize this temperature. Again, it is necessary to release some steam to lower the temperature since it takes 90°C for a simmer. For the browning, we applied the same test protocol as for the multifunctional cookers. We installed two probes in the bottom of the bowl (at the hottest and medium point). At the hottest point, the Instant Pot first rises to a peak of 150°C, then stabilizes around 130°C. At the middle point, we recorded a temperature between 126 and 145 °C. When it comes to browning, there is nothing to worry about, the Instant Pot knows perfectly well and quickly how to brown food. However, it shows better homogeneity than Cookeo in this cooking method.

And since we are testing a pressure cooker today, we could not miss the pressure cooking. So we set the Instant Pot to Pressure Cook - High mode, to see how high the temperature could go. The DUO60 took 30 minutes to reach 116°C, which is exactly what we can expect from a pressure cooking. By launching different cooking programs, we regret that the Instant Pot does not offer temperature control, as some food processors do. This would allow for more accurate cooking.

To tell you the truth, we were expecting more from the Instant Pot! Faced with such a media noise in the United States and the flood of overwhelming user opinions (especially on Amazon), we remain perplexed. Although this multi-cooker performs relatively well, the cooking programs are extensive and pressure cooking is well controlled, the rest is complicated. Reading the control panel is not necessarily innate, programming is tedious and the valve is not motorized, as it can be on the Cookeo. This forces the user to stay close to his Instant Pot to evacuate the steam. We've known more practical. The Instant Pot is a very recommendable device for those who like to understand the workings of their household appliances. Nevertheless, Moulinex's Cookeo has nothing to envy it, except its size. 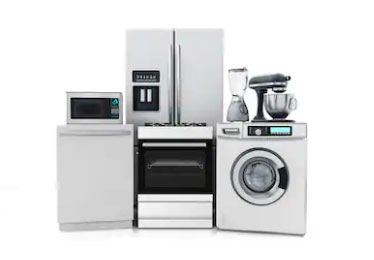